Skip to content
Mark KempJanuary 31, 2016Featured Music7 Comments on That Time When Paul Kantner Stood Up to the Hell’s Angels 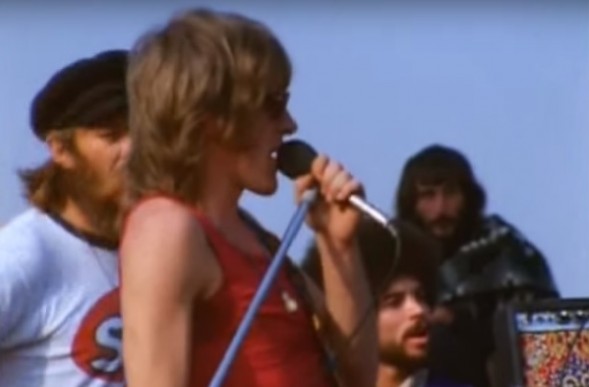 If you’ve seen the Maysles brothers’ concert documentary Gimme Shelter, you know the story of what happens in the clip below: Jefferson Airplane begins performing “The Other Side of This Life” during their set at the infamous 1969 Altamont Speedway Free Music Festival, held just east of San Francisco two years after the Summer of Love and less than four months after the comparatively peaceful Woodstock.

Jefferson Airplane’s performance marks the moment on that dark day in rock history when the atmosphere of violence that had been brewing — created by the Hell’s Angels — ratchets up several notches. The Angels had been brought in by the Rolling Stones, on recommendation from the Grateful Dead (and some say the Airplane), to work “security” at the event.

[Minute 4:14] Kantner to the crowd: “Hey man, I’d like to mention that the Hell’s Angels just smashed [Airplane singer] Marty Balin in the face and knocked him out for a bit. [In a dry, sarcastic tone] I’d like to thank you for that.”

A Hell’s Angel grabs a microphone: “Is this on? If you’re talking to me, I’m gonna talk to you.”

Kantner: “I’m not talking to you, I’m talking to the people who hit my lead singer in the head.”

[Minute 4:57] A few Angels, wielding weapons, begin beating the shit out of hippies in a pit in front of the stage.

Within a few hours, one of the Angels will fatally stab an 18-year-old black kid — Berkeley art student Meredith Hunter, who’d left the stage area earlier to get his handgun after becoming freaked out and pissed off by the violence. The Stones are unaware of the gun or the killing as they segue from “Sympathy for the Devil” to “Under My Thumb” amid total chaos, on and off the stage. (The Angels would later attempt an assassination of Mick Jagger at his holiday home in New York’s Hamptons, as revenge, but the plan failed when the boat they were using overturned in stormy waters, according to the FBI.)

Paul Kantner, Marty Balin and later Keith Richards were the only three rockers who were documented at Altamont pointedly standing up to the Angels. Years later, Kantner would go into more detail about that day with Bay Area music writer David Gans, explaining that rock festivals shouldn’t be exercises in control — particularly by a motorcycle gang whose members were paid in beer.

“There is no control — that’s the glory of a rock concert,” Kantner said. “The glory of the outdoor rock concert a la what the Stones tried to do [at Altamont] — and what we had been doing for years here, and probably what John Philip Sousa did in open-air sheds in the eighteen-whatevers — is the lack of control, and [the] enjoyment. There is no need for control. That’ s why Altamont was such a shock.”

Ironically, the only problem at Altamont, according to Kantner, were the gang members who were hired to work the “security” detail. “Nobody was out of control except the Hell’s Angels — put it that way,” Kantner said.

Kantner stopped short of blaming the Hell’s Angels as an organization, though, pointing out that at many events in San Francisco, the Angels had been helpful. “The bikers were the babysitters at the Human Be-In, [taking care of] lost children,” he said. “They didn’t have an altogether bad reputation.”

He blamed specific Angels — younger ones who didn’t understand biker protocol. “It turned out that most of [the veteran Angels] were having a big meeting in Oakland [on the day of Altamont, and] a lot of the guys who were there and causing a lot of the hassle [at the concert] were neophytes, young would-be’s — early trainees, as it were. The older guys, who usually keep them in line … weren’t present that day … I don’t blame it on the Hell’s Angels. I blame it on the [Angels] who were there, but I don’t characterize that as ‘the Hell’s Angels.'”

There’s so much I could write about Paul Kantner, who died last week at 74. But I chose this story because I’d always admired his behavior at Altamont and wanted to find out more about his experience that day. I remember walking away from Gimme Shelter as a kid, bummed out, my illusions of the ’60s shattered — but with even more respect for Kantner than I’d had before. (And I’d already had a lot of respect for him.) Now I saw Kantner not only as an idealist who sang psychedelicized folk songs that resonated with me, and wrote concept albums about exploring other worlds — but also as a ballsy dude willing to stand up to a Hell’s Angel.

Kantner’s music and worldview had helped me get through high school in a time in North Carolina when bikers and rednecks there also would terrorize kids who just wanted to have fun, listen to music, and be free of the burdens of the world for a little while. On a smaller scale than Altamont, these guys would stop outdoor concerts, get in fights, threaten newspaper reporters, and generally wreak havoc over silly spats nobody else cared about. Some of their sympathizers are the very same people who criticize (at best) black gang members today.

What’s more, my time in high school happened to coincide with some of the most musically vacuous years in rock history: 1975 to 1977 — the era when rock went so corporate that any element of experimentation had been quashed. It was just after glam rock’s heyday, after southern rock had begun to lose its drawl, but before punk took root (at least in my neck of the woods). While most of the white rock heads at my school were listening to Boston, Kiss, and Ted Nugent, I would steal away to my car at lunch and bliss out to the Jefferson Airplane, Quicksilver Messenger Service, Country Joe & the Fish, the Grateful Dead’s Anthem of the Sun, or the Allman Brothers’ “Dreams.”

I wanted 1976 to be 1967. I felt I’d missed out. I wasn’t fully cognizant of punk yet, and I wasn’t appreciative of R&B unless it was earlier soul, Sly, or Funkadelic.

Jefferson Airplane took me far away from the bullshit of high school. I couldn’t get enough of Surrealistic Pillow, Crown of Creation, After Bathing at Baxter’s, and Volunteers, and I was at just the right age to be seduced by the sci-fi storyline of Blows Against the Empire, Kantner’s first album as Jefferson Starship. I wanted to blast off into space, and his songs told me this was a distinct possibility.

In “Hijack,” from Empire, Kantner sang:

You know, a starship circling in the sky — it ought to be ready by 1990.
They’ll be building it up in the air, even since 1980.
People with a clever plan can assume the role of the mighty,
and hijack the starship, carry 7,000 people past the sun.
And our babes’ll wander naked through the cities of the universe.

I believed it. I was ready to sign up. I also believed Kantner’s lyrics about peace and love and freedom in songs spanning from the psychedelic-folk of “Martha” to the anti-establishment pronouncements of “Crown of Creation” to the youthful, celebratory “We Can Be Together,” among many others. The Airplane would be part of my roadmap out of the world I came from — the small-town southern world that, if I stuck around, would have me working in a factory. I was so intent on leaving my hometown behind that I planned a pilgrimage to San Francisco at 18 — exactly one decade too late. The summer after graduation, in 1978, my friend Jeff and I hit the road — long hair, short shorts, a half-pound of pot, and 100-percent naivety. A few weeks later we arrived in the Haight-Ashbury with a map I’d cut out of Rolling Stone, dropped by the Airplane house (Kantner and company were long gone, of course), and pretended to be hippies.

Then we returned home to attend college; I discovered punk, and moved on. But I never stopped liking the Airplane, even after Kantner himself sold out to the corporate-rock ogre, though I could never listen to later Starship records. Fast-forward to today, more than 30 years later, after decades of crisscrossing the country, living in New York, Los Angeles, and back home in North Carolina: I’ve made my home in the Bay Area. I like it here, even though it has changed dramatically. There’s still something magical in the air. I like seeing the Golden Gate Bridge when I look out over the bay, or driving by People’s Park in Berkeley, or running into Country Joe now and then.

In the past few days, I’ve read a lot of Kantner obits from people who knew him, people who didn’t, and people who have no clue of anything his bands have done aside from “Somebody To Love,” “Miracles,” the tepid “Jane,” and the god-awful “We Built This City on Rock & Roll.” I’ve heard people say Kantner was a jerk, he was a grump, he was this and that. When I heard of his death on Thursday, I was disappointed I never got the chance to run into him. But now I’m OK with it. Nothing will spoil my memories of his music helping me get through high school and out of Dodge. Or that indelible image of him talking back to a Hell’s Angel.

Godspeed, Paul. You were the ultimate dreamer. You fought the good fight. You stood up to Angels. And now, you’ve finally hijacked that starship. You’ve reached the second door. You’re swirling together with 7,000 gypsies.

Now, sit back and enjoy this rich sampling of Kantner’s music from the earliest days of the Airplane to his blast off with the Starship. His recorded output began to suffer in the late ’70s when the Starship evolved into a pedestrian hard rock band, but there have been a few bright spots — most notably Jefferson’s Tree of Liberty, a set of protest cover songs by the likes of Bob Dylan, Phil Ochs, and Woody Guthrie that Kantner recorded as Jefferson Starship in 2008. However, I’ve focused here on his strongest years as a psychedelic folk-rock pioneer: 1966 to 1973.