Cops who kill blacks and Latinos are not just getting off scot-free — they’re getting promotions and pay raises.

Earlier this week, Erick Gelhaus, the killer cop in Sonoma County, CA, who three years ago gunned down Andy Lopez, a 13-year-old carrying a toy gun in a Santa Rosa park, was promoted to sergeant and given a substantial pay raise. 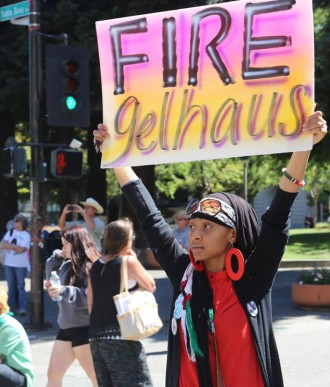 “Andy Lopez had committed no crime and no one had called the police about him, yet Gelhaus and his partner acted as if they were in a combat zone on a search-and-destroy mission,” Elbert ‘Big Man’ Howard, a founding member of the Black Panther Party, wrote in the San Francisco BayView, on August 7.

“He shouldn’t be getting a promotion, he should be terminated,” Thomas’ mother Mawuli Davis told the Atlanta Journal-Constitution in February. “It sends a message that what happened to Nick Thomas is okay. It’s one thing to not be indicted, it’s another thing to be rewarded.”