Over the past three days, I’ve been asked numerous times how I feel, as a former Rolling Stone editor, about the magazine’s latest cover featuring Boston bombing suspect Dzhokhar Tsarnaev. My first thought upon seeing the image — with the cover line, “THE BOMBER: How a popular, promising student was failed by his family, fell into radical Islam and became a monster”  — was, “What a compelling cover! Can’t wait to read the story.”

Then came the controversy. People were going ballistic about it, threatening to cancel their subscriptions because Rolling Stone was “glorifying a killer.” CVS, 7-Eleven, Walgreens and other stores refused to carry the magazine. It was ridiculous.

Silly controversy of the day: Rolling Stone cover of Boston bombing suspect Dzhokhar Tsarnaev. RS used an image of the subject of its news-related cover story. What’s controversial about that? RS also put Charles Manson on its cover in 1970, when THAT case was in the news. Why are we so squeamish about journalism today?

To Kraig, a resident of Dorchester, Mass:

You wanted my two cents, Kraig? I think this is a totally ridiculous controversy. Rolling Stone is a magazine that reports on pop culture and news, and it’s done MANY news-related covers in its history. RS also put Charles Manson on the cover more than 40 years ago. We’re in a culture now that doesn’t recognize great journalism as it has in the past. All we see is magazines trying to sell copies. This is a perfectly reasonable choice for a cover image. It doesn’t glorify the subject of the story — it illustrates it.

To Rachel, who lives in Boston:

This should not be a controversy. With this cover, Rolling Stone has kept with Jann Wenner’s decades-long mission for RS to be a magazine that covers news and culture through the prism of pop culture. Putting the Boston bombing suspect on the cover in 2013 is absolutely no different than RS’s putting Charles Manson on the cover in 1970. What I don’t understand is why we hold newspapers, magazines and journalism in general to such low standards today. The current issue of RS is spectacularly in keeping with its history as THE publication of record on news and popular culture. Glad to have them back in this role, though they never really left it, as Matt Taibbi’s work in more recent years and big stories like Michael Hastings’ piece on Gen. Stanley McChrystal have shown.

By the way, to those commenting on what should matter most right now (in terms of the grieving victims, the timing, etc.): what actually should matter most for Rolling Stone, or any other journalism outfit, is to do great journalism in ways that sell magazines and inform and enlighten citizens of a free society that prides itself on being allowed to get to the truth of issues of importance. What matters to us, as citizens of that society, is inextricably linked to how much good information we get from our journalists. Then we can have proper, well-informed context for the respect and compassion we give to those who suffer. If we demand that our journalists refrain from reporting or covering stories in ways that cause pain or offend our senses, we’re cutting off our life sources of information. And that’s what we seem to be doing too often today.

Face it: this is a difficult and painful story. Yes, it’s hard to look at the image of that kid and ponder the terror he caused. Just as hard as it was to look at Manson. It is journalism’s role to MAKE us look at these painful things and to get to the core of why these things happen. There’s no good “timing” for truth.

To Greg, a resident of Charlotte, N.C.:

I’m not taking your comments personally, Greg. Why would I? For one, I don’t agree with you that this is a left-right issue. It’s a journalism issue.  And by the way, it’s not your criticism of Rolling Stone that bothers me. Yes, I worked for RS. But I’ve criticized the magazine vigorously over the years for other choices they’ve made. Did they use this image on the cover to sell issues of the magazine. Of course they did. That’s what any magazine cover should do. But using this particular image on the cover happens to be completely and totally sound, journalistically speaking, and I don’t understand the controversy. It speaks precisely to what the story is about — a young man who looks like any other average young Rolling Stone reader, but who made a choice that rocked the nation. The story endeavors to answer the question: Why? And it does a terrific job in doing this. As for glorifying Tsarnaev: In what possible way does a cover image with the cover line, “How a popular, promising student was failed by his family, fell into radical Islam and became a monster,” glorify this young man? We shouldn’t be criticizing RS for this cover — we should be applauding the magazine for doing great journalism in a time when there’s not enough great journalism.

To Regina, who lives in Jersey City, N.J.:

(Note: In questioning RS’s choice to put Tsarnaev on the cover, one commenter on Regina’s thread argued that the Manson/Tsarnaev comparison was false because Manson was “the most famous cult leader in history” and Tsarnaev is merely a “punk adolescent trouble maker” who “set off some bombs on a crowded street.” I begged to differ.)

It’s news — the kind of big, fat, weighty, momentous, generation-defining news Rolling Stone has always covered prominently. It’s the kind of news that perfectly dovetails with the interests and concerns of RS’s demo, circa 2013. Why is Charles Manson the most famous cult leader of all time? Partly because Rolling Stone (and other media outlets of the time) told us he was. But was he, really? Manson didn’t do nearly as much damage as Jim Jones, nor did Manson have the reach of an L Ron Hubbard. But Manson WAS the right monster for Rolling Stone to put on its cover in terms of his news value and interest to RS readers of the time. He was a hippie-looking guy who twisted hippie values into a nightmarish, violent, paranoid, anti-establishment, apocalyptic fantasy that would attract vulnerable young people in search of a guru. He was one of many such gurus, but Manson’s influence had devastating consequences.

By comparison, Dzhokhar Tsarnaev, who looks like your average young indie rocker but set off bombs on a crowded Boston street in 2013, causing one of the most horrific tragedies of our times, personifies one of the scarier aspects of the current youth culture — idealizing an extremist religious ideology in a way that has potential to (and in his case, actually does) wreak havoc on society. Because of Tsarnaev’s youth, the circumstances of his childhood and the effects his acts could have on others, this is big, huge, important news for readers of Rolling Stone today — for any kind of readers, actually, since many other news outlets are also doing prominent pieces on him (as many others did on Charles Manson). So of course, Tsarnaev can be compared with the other notable monsters RS has done cover stories on. 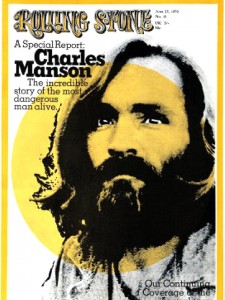 (The commenter on Regina’s thread later replied, reasonably, that Rolling Stone has had its choices of other domestic terrorists for cover stories — Timothy McVeigh, Adam Lanza — but chose to use a “cute” killer instead. The commenter also mentioned that the Tsarnaev cover was bad timing, since it came right on the heels of the Trayvon Martin verdict, which was bigger news for that cycle. I didn’t totally disagree, but I offered some possible reasons why, other than simple crass cynicism. )

Same with Dzhokhar Tsarnaev. Did they consider his “cuteness” when making the decision to put him on the cover? I suspect they did. That’s part of the story. But I’m also quite sure that was hardly the only factor. Tsarnaev’s crime was huge. Was it bad timing in terms of the timing of the verdict in the Trayvon Martin case? Absolutely. But that kind of thing happens when you schedule issues. Hopefully, they’re working on a Trayvon Martin story as we speak.

Your points are totally valid and this isn’t an unhealthy debate to be having. But I’ve seen a lot written about this by other members of the media that strikes me as mighty hypocritical. Maybe it’s jealously. Or maybe those journalists just want to get their 15 minutes of fame on this issue, too.